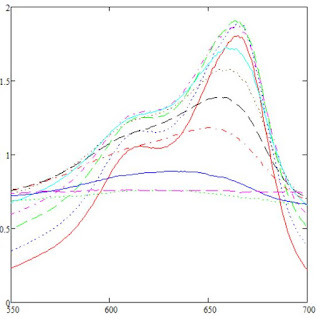 To note, over the coming summer months I will probably be posting at a lower frequency than normal due to this time period being primarily dedicated to my research.


That being said it's important to maintain outlets and as such it's time to move forward with this series.


To demonstrate the derivation, let's suppose that I have a sample with some associated concentration Cj. If I were to pass a particular wavelength of light with an initial Intensity Io, through my sample along a pathway with the arbitrary length b, and measure the output intensity of my light "I", I would notice that the intensity of the output light with respect to the input light decreased by some amount.

If I were to change the concentration of absorbing material in my sample, I would notice that the relation between the intensities would vary. This variation with respect to concentration is proportional on two distinct variables, the intensity of the light beam itself, and the path length. In calculus terms, that relation would look like the following:

More observations at various concentrations would show that this relationship is of first-order nature. I.E. changes in absorbance are related to a constant multiple of changes in concentration. As such, the proportionality can be written as a first-order differential equation equated by some unknown constant (to note, this constant is unique for every individual chemical species).

Since this is a single-variable derivative we can separate out the derivative as if it were a fraction, and then rearrange the equation

Integrating both sides of the equation over their respected domains... 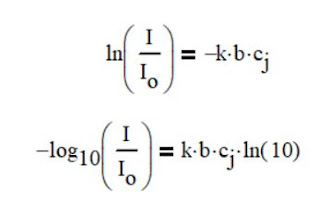 to which, if we define the following constants as such: 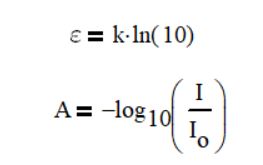 we yield the final form of the beer-lambert law.

now, if your absorption setup designates a constant pathlength, through means such as a cuvette, such restrictions yield a system where concentration is now simply a constant multiple of absorbance. I.E, a linear relationship. Using A few known concentrations measured for absorbance and you can interpolate through mathematical tools such as a least-squares linear regression or whatnot.

Just as important as it is to understand the applications of absorption spectroscopy, it's also important to understand its limitations at following our mathematical model. In our intial observations, it was postulated that dI/dcj was linearly related to the intensity of the monochromatic beam (assuming a constant pathlength). However, this correlation breaks down at high concentrations, due to intramolecular interactions between absorbing molecules. This deviation in linearity can be accounted for through utilizing a different interpolation methodology (say, cubic spline). It's important to understand how mathematical models are derived before we take the end equation to plug-and-chug.

A pretty nifty application of this absorption phenomena is frequently employed in hospital settings through what's called a pulse oximeter. The device is placed on a patients finger to test absorbance of 650 and 940 nm wavelengths through arterial blood. Reduced and oxygenated hemoglobin have differing k values at both of these wavelengths, and monitoring the absorbance of light from hemoglobin allows for the flow of oxygen through blood to be quantified.

With that, let's end our conversation for now. If you'd like to go more in depth with other aspects of absorption spectroscopy, feel free to leave a comment below.