Beyond Fear: The Nuclear Fuel Cycle In regard to energy production and byproducts 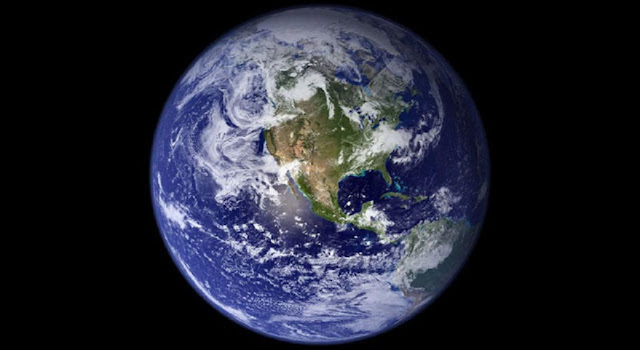 I've decided to publish this work on my site because it's a topic near and dear to my heart- it's a bit lengthy but I hope you might consider it a topic worth understanding.

ABSTRACT: Within the United States, energy in the form of electricity is produced predominately through means such as fossil fuels, nuclear power, and renewable energy resources. Among these current electricity sources, Nuclear Energy continues to be such a point of supply that allows the country and states to produce enormous amounts of energy with a minimal amount of pollutants being produced in the process. The powering mechanisms of nuclear fuel consist of fuel rods that contain approximately 2-3% uranium-235 oxide (235UO2) for nuclear fission. Upon fission, used nuclear fuel cells still contain roughly 1% of the original 235UO2.1 Recycling this uranium for future use is of importance due to the environmental protection aspects as well as market demand for the uranium oxide fuel used in the nuclear reactors.2 However, the established method employed by used nuclear fuel (UNF) reprocessing facilities to reclaim still feasible material, the PUREX process, releases fission products such as 129I, 85Kr, 14C, 3H and multiple Xe isotopes as an off-gas composition.3 These byproducts of nuclear waste reprocessing require serious attention, given the harm that these volatile radionuclides pose to both the public and the environment.4 Such precautions to these volatile radionuclides have inclined other nuclear states, such as France, to seek ways to effectively contain these radioactive particles using various methods of absorption, adsorption, cryogenic distillation, and other immobilization techniques.4
Introduction


The economic function of energy demand in the United States is in a continuous state of inflation as our national population continues to increase. As our country continues the search for new methods of meeting the American demand for energy, nuclear power continues to be an option that is cost effective, low risk, and economically favorable. Yet, due to the perception of energy production through nuclear power being less than favorable in the eyes of the American public, the idea of expanding our nation’s nuclear capabilities continues to suffer in the court of public opinion. An instinct of fear towards nuclear power has been established in the minds of the electorate. The goal of this publication is to offer an explanation to the nuclear process, in terms of energy production and waste management, in a method that is both simple to understand yet thorough in explanation. Hopefully, upon conclusion, one might be able to hold an understanding of both the benefits and the risks in their proper contexts, so that a more informed consensus can be established.
Energy Production: The Nuclear Process
The theory behind nuclear energy at an atomic level is fairly straightforward. A collision between the atom of a fission reactant, or fuel, and a supplied neutron will generate fission products and subsequent neutrons. These ensuing neutrons can henceforth continue the nuclear fission process through interactions with other fission reactants within the nuclear fuel cell crystal lattice.  For example, a single 235U atom can be struck by a supplied neutron which, due to the instability of the 236U isotope, will cause the Uranium nucleus to split into the fission products of the krypton isotope 91Kr, the barium isotope 142Ba, and three subsequent neutrons.6 These three neutrons can then move forward, further progressing the fission reaction by interacting with other 235U atoms within the uranium oxide crystal lattice.

(6)
This process of Uranium fission generates energy firstly relative to the difference in masses between the associated particles.  In this case, the masses of the following particles are given:

Where the differences in rest mass can be calculated via:

And through utilization of Einstein’s mass-energy equivalence formula…

…. the energy released through the fission reaction can be quantified with respect to the rest-mass.

Now it’s important to recognize that in this example we’re neglecting all association with the kinetic energies of the particles. However, incorporating those kinetic energies via relativistic principles will allow one to calculate the total energy released via the nuclear fission process, via changes in both kinetic and rest-mass related potential.

To note, if the particle velocity is appropriately small compared to the speed of light (less than approximately 6000 kilometers per second), using binomial theorem to expand the radial and truncating the expression after the first set of terms, and finally reducing the equation, will yield an appropriate kinetic energy term of the following form:7

Even though the process of producing energy from nuclear reactions is straightforward, it’s important to recognize that the fundamental consequences of nuclear power aren’t strictly a function of the reaction per se, but more so a function of the products.
Subcritical, Critical, and Supercritical
If you observe the fission reaction previously listed, it’s firstly important to note that the ratio of neutrons consumed by the reaction with respect to the number of neutrons produced by the reaction is 1:3. This demonstrates that the reaction rate of 235U has the potential to increase on an exponential timescale. I.E. one 235U atom causes three 235U atoms to react, which causes nine 235U atoms to react, which causes 27 subsequent reactions, 81, 243, etc. At 50 iterative steps, the number of reactions per iteration goes to a magnitude of 1023. At 500 iterative steps, that magnitude goes to a factor of 10238. 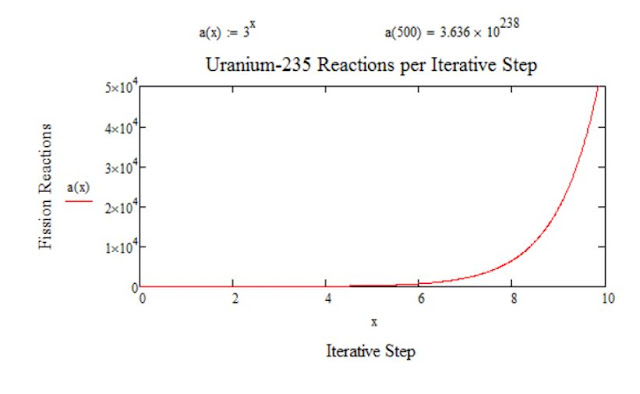 This process of exponential growth is what’s referred to as a supercritical reaction. For the previously demonstrated case, the multiplication factor k, the ratio of the number of neutrons in the next iterative step with respect to the preceding iteration, is equated to the value of three. Or, for every one reaction, there is a 100% probability for three subsequent reactions to occur. Any process where the k factor is greater than one is considered a supercritical reaction process, and as such is a reaction process that is uncontrollable. To achieve a steady-state fission reaction of a nuclear fuel cell, the fission reaction must be what is considered critical, where the k factor for the fission process is exactly equal to the value of 1, where one fission reaction causes only one subsequent fission reaction. Finally, any k factor that is less than one renders the fission process to be that of subcritical, and as such the reaction output asymptotically approaches zero. nuclear reactor operations are optimized at the critical point. 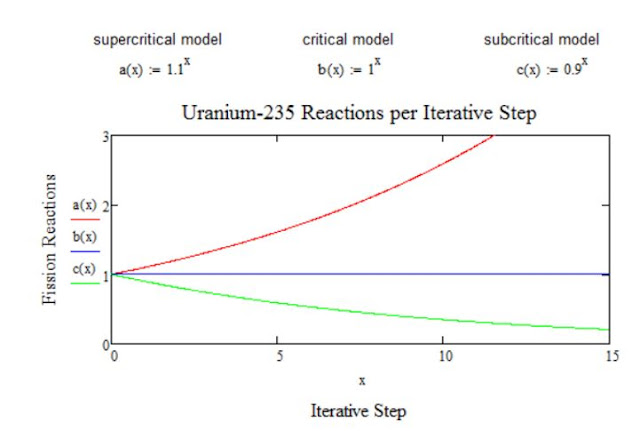 With respect to the iterations, integrating the functional models and normalizing their values to Avogadro’s constant demonstrates the number of iterative steps it requires to react 1 mole of material. Or, in this case, how many iterative steps it takes to release our previously calculated Rest-Energy value if these models depicted the fission reaction of 235U.

The resulting integration processes demonstrate that, in case of model a(x), it would take 550 iterative steps to react 1 mole of 235U, for model b(x), 6.022x1023 steps, and in the case of model c(x), no amount of iterations would produce the desired energy. For perspective, if each iterative step has a time equivalence of an attosecond, model a(x) would output the calculated rest-energy in approximately ½ of a femtosecond (10-15 sec), and model b(x) would output the same energy amount in approximately a week.
Radioactive Byproducts
Another fundamental consequence of nuclear fission is the production of unstable radioactive byproducts. If one were to map out a spectrum of stable atomic isotopes, neutron number with respect to atomic number, they would observe that a function mapping the spectrum would have a non-constant derivative of the form n.xn-1, where n was greater than 1. Or in other terms, maintaining stability as you increase in atomic number requires more neutrons per proton as you reach higher and higher proton quantities. 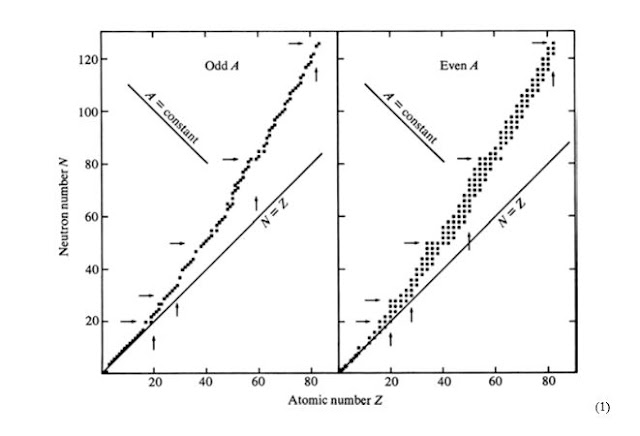 The number of nucleons (summation of protons and neutrons) is constant throughout a fission process. Therefore, the consequence is that the fission byproducts will most likely be unstable, and as time progresses the fission products themselves will undergo radioactive decay until they reach a stable state. For example, the barium isotope 142Ba is unstable and would undergo four sets of  beta-minus decay to generate the stable neodymium-142 isotope.
Half-life
It’ll be important to touch on the concept of half-life with respect to radioactive decay before continuing on to the topic of current nuclear capacities of the United States. Although it is currently theoretically impossible to predict exactly when an isolated particle will decay, the statistical analysis of a large cluster of identical particles is on the other hand is quite simple to model. Radioactive decay is a first-order rate reaction, with a solution of the following, for some material “a” with a given concentration C: 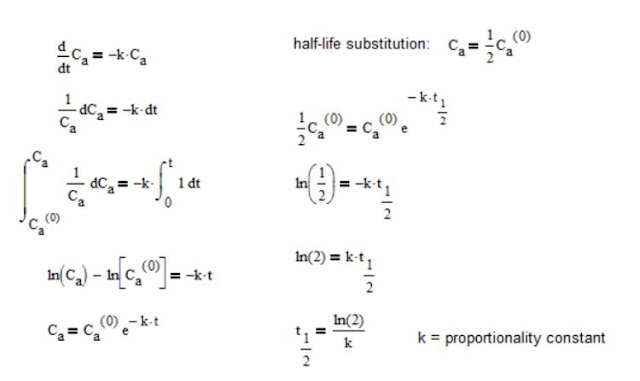